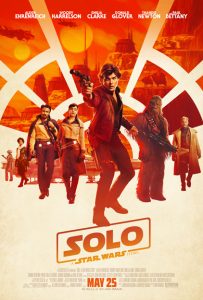 So, when Disney/Lucasfilm announced all these universe-expanding Star Wars Stories, a film delving into the secret origins of Han Solo was not high on my list of Star Wars stories that I wanted to see.  But still, as it has that Star Wars name on it, I was curious.  And then, throw in its now-legendary troubled production, and I was kinda nervous.  But still, I’ve been there on opening day for every Star Wars film since The Phantom Menace.  We gotta support this thing or else it will never take off.  So, I was ready to see Han Solo: Secret Origins.

On the ship-building planet of Corellia, a street rat named Han is living a life of indentured servitude to the crime lord Lady Proxima.  But, he has dreams of making it out of there and finding his own way in the galaxy.  He eventually escapes by enlisting in the Imperial Forces, but still dreams of being his own man and not answering to anyone.  He eventually finds a smuggler and thief named Tobias Beckett has infiltrated his unit, and joins Beckett’s crew.  Their first job doesn’t go so well, leaving them indebted to crime lord Dryden Vos.  In order to repay their debts, Han proposes a risky heist on the mines of Kessel.  In order to pull this off, though, they need a crew:  Chewbacca, a prisoner Han rescued and has become good friends with; Lando Calrissian, a scoundrel and gambler who can provide them with a ship; and Qi’ra, the girl Han left being on Corellia, who found her own way off the planet, rising through Vos’s criminal organization and become one of his Vos’s top lieutenants.  Will Han be able to pull of this heist and become the greatest rogue the galaxy has ever seen?

Man, Donald Glover absolutely nails it as young Lando, just oozing charm and charisma.  His navigation droid, L3-37, is also hilarious as she fights for droids’ rights.  Lots of great space battles and action scenes.  I mean, whoever thought we’d see a train heist in a Star Wars film?  And some great cameos and Easter Eggs from other corners of Star Wars lore.

I’m sorry, but I didn’t quite buy Alden Ehrenreich as young Han Solo.  I found him to be just a little too…chipper to be the young version of the rogue we all came to love.  And maybe it was the 3D, but I found the look of the film to be rather murky, making it tough to follow some of the action scenes.

I thought it was fun, and delivered Rogue One‘s initial promise of being a heist film with no Jedi Knights coming into save your butt.  Not the best Star Wars, but still enjoyable.