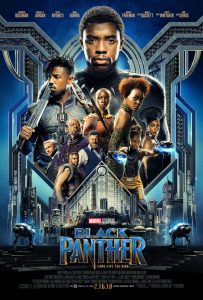 Another year, another Marvel movie!  Now, we get to learn the tale of the Black Panther, whom we first met in Captain America: Civil War.  T’Challa, ruler of the African nation of Wakanda, and one of the most beloved Marvel characters of the past 50 years.  At this point, I’m down for pretty much everything Marvel does, so of course, I was off to see it.

It’s about one week after the events of Captain America: Civil War, and T’Challa returns home to Wakanda to officially be coronated.  In addition to ruling the people of Wakanda, T’Challa also has to defend it’s biggest secret.  Despite its reputation as a third world nation, Wakanda is actually the most technologically advanced country in the world, thanks to sitting on a literal mountain of vibranium — the metal that Captain America’s shield is made of.  Wakanda has long hidden it’s technological prowess from the world, for fear that outsiders would use it for the own nefarious purposes.  People such as international arms dealer Ulysses Klaue, or Wakandan exile Erik Killmonger.  Before long, T’Challa is facing threats to Wakanda, and his own throne.  Can the Black Panther fight these threats and protect Wakanda?  Will they ever decide what Wakanda’s place in the world should be?

Oh, there’s so much good stuff.  War rhinos, for one.  The entire sequence in South Korea is pretty much a gratuitous homage to James Bond movies.  And there’s just so many great characters in the film!  Like Shuri, T’Challa’s kid sister and Wakanda’s chief scientist.  She’s pretty much the Q to Black Panther’s James Bond, and she does it with all the sass you would expect a kid sister to have.  She’s truly the scene stealer.  And while Marvel’s villains tend to be a little under-developed, they make a genuine effort with Killmonger, who has some pretty compelling arguments for why Wakanda should show itself to the world.

Not much.  Marvel’s got a pretty slick formula worked out now, and it does lean into the formula in quite a few places.

Another winner from Marvel.