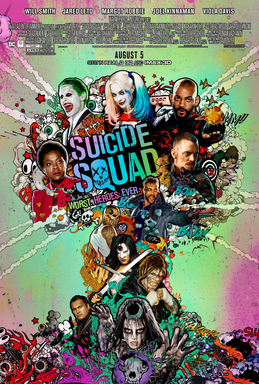 While I’m amazed that a Suicide Squad movie got made, I couldn’t help but feel it was made as a reaction to Guardians of the Galaxy.  It was like someone at DC said, “Hey!  Don’t we have our own wacky team of super-powered misfits we could turn into a movie?”  That’s more evident ever since Deadpool came out this spring, as the ad campaign took a turn to be more wacky and irreverent, like Deadpool.  Plus, add to that that this is now part of the DC Cinematic Universe, created as a reaction to Marvel’s Cinematic Universe.  Could something so reactionary be able to stand on its own?

With the growing presence of meta-humans in the world, secret agent Amanda Waller comes up with a daring plan:  with so many of the bad meta-humans already in custody, why not blackmail them into doing government missions?  And thus, Task Force X is born, and they immediately get the nickname the Suicide Squad.  With war hero Col. Flag overseeing them, the Squad consists of Deadshot, the world’s best marksman, Harley Quinn, best known as the girlfriend of the Joker, El Diablo, a fire-demon, Captain Boomerang, the Aussie bank robber, Killer Croc, and Katana.  For their first mission, they’re turned loose in Midway City when a former member of the Squad, the Enchantress, unleashes a demon bent on world destruction.  And a further wild card:  when the Joker learns his girlfriend has been sprung from prison, he starts carving a path of destruction to get her back.  Can the Squad prove that there’s good in being bad?

Margot Robbie as Harley Quinn steals the show.  She is pitch perfect, if only that the Brooklyn-esque accent the character traditionally has tends to waver.  Will Smith also makes an excellent Deadshot, and I really hope we get to see more of Jared Leto’s Joker in this cinematic universe.  The introductions to the characters are great, as we see how they’re apprehended (and get quick glimpses of Batman and the Flash)!

A lot of heroes, like Katana and Killer Croc, kind of get short shrift in the film.  As much as I love the Joker, he’s not in it all that much.  And, as many other critics have pointed out, I’m getting tired of the whole “glowing portal of world destruction” that all these movies have.

As superhero movies go, Suicide Squad was just so overwhelmingly…average.