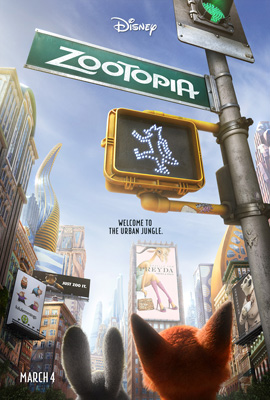 Zootopia didn’t quite grab me when the first trailers came along.  It looked cute, but nothing really jumped out at me.  Then it actually did come out, and the reviews for it were phenomenal.  I love Disney, and I still had a gift card left over from Christmas, so I figured why not?  Besides, Disney Animation has been on a pretty good run lately, and the last time I felt indifferent towards a Disney animated film was Wreck-It Ralph, but I checked it out because of the positive reviews and was wonderfully surprised.  So we could go two for two.

In a world populated by anthropomorphic animals, Judy Hopps is just a small town girl with a big dream:  head to the metropolis of Zootopia and become its first-ever rabbit police officer.  With grit and determination, she graduates from the police academy at the top of her class, and gets her first assignment as a meter maid.  Her path soon crosses that of a fox con artist, Nick Wilde.  Showing a little too much ambition, Judy soon lands the case of finding a missing otter.  Since Nick was the last one to see him, he’s her only lead.  The two then form an unlikely partnership as they go through Zootopia’s criminal underworld, soon uncovering a mysterious conspiracy.  Will they find the true culprit?  And will they be able to battle their own prejudices about the predator/prey relationship?

This film has a very solid message about racism and combating prejudice, as many characters fall back on their stereotypes of certain animals:  sly foxes, savage predators, and such forth.  It’s neat seeing the issue tackled in this way.  The voice cast is top notch, with Ginnifer Goodwin being unbelievably adorable and likable as Judy, with Jason Bateman injected just the right amount of smooth-talk for Nick.  And this is Disney, after all, so of course the animation is gorgeous.  The city of Zootopia is a visual feast, with buildings designed to accommodate the unique physical needs of such a wide cross-section of animals.

While I did appreciate the message, it does get a little blunt in some places.  The plot is a bit formulaic, as I was hoping for a few more twists and turns.  Can we please retire the “super-nice guy turns out to be the villain” trope, because I called the criminal mastermind the very minute the character was introduced.  And we get it, Disney, Frozen is still a thing.  I counted at least a dozen Frozen Easter eggs and in-jokes, that stood out in the annoying way.

I have pretty much the same opinion that I had with Frozen.  I enjoyed it, it was a fun afternoon at the movies, but I didn’t quite see it as the game-changer everyone is making it out to be.